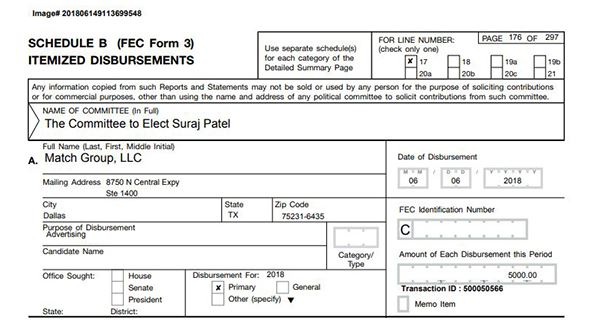 Finance data has shown that New York Democrat Suraj Patel has spent a total of $5,000 on Tinder-related campaigning ahead of today’s primary.

The $5,000 “advertising” payment, which was disclosed in June, was made to Match Group LLC.

The strategy involved Patel using his brother’s photo for his Tinder profile, and swiping right on different users based in his New York district.

Patel has named the campaign “Tinder Banking”, a play on phone banking.

His campaign even produced a “Tinder Banking 101” guide for volunteers and was Tweeted by a New York Times reporter.

Patel created a tip-sheet which he named: “How to Talk to Strangers about the Election,” in which he recommends volunteers to use Tinder and a other dating apps, such as “Bumble, Hinge, Grindr, or whatever other dating app tickles your fancy.”

Campaigns often use social media to create voter outreach, but it is rare to see reports of spending on dating sites. However, Rep. Jerrold Nadler (D-NY) was the another candidate who paid an online dating company during a campaign.

He spent $137 for advertising on Match.com.