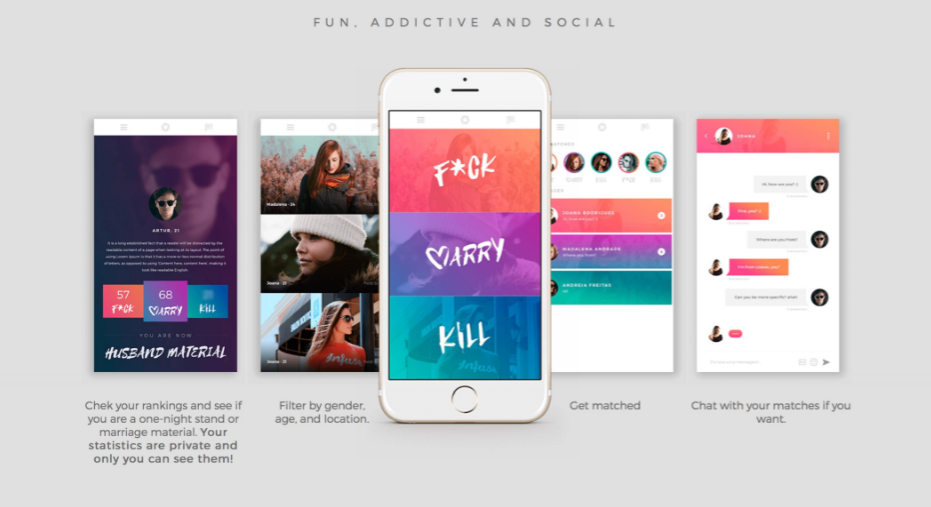 FMK, a creative dating app from Portugal, has enjoyed early download success since launching in October 2016.

The platform is an adaptation of the parlour game ‘F*** Marry Kill’, wherein players choose how they would hypothetically treat three friends or celebrities.

The interface shows three profiles at once, and users must choose who they would potentially hook up with, wed and murder from the selection.

A match occurs when two users choose the same option. The designers note that the three unique kinds of match can then serve as an icebreaker in conversations.

A set of predefined pick up lines are also included with the interface to make initiating chats easier still. A typical example would be “Kissing makes you consume around 5kcal. Wanna try this workout together?”

Matches that elected to ‘kill’ one another start 29% of conversations, according to the app.

Users are able to access data traditionally hidden from dating app consumers – they can see how many people voted for them and which kinds of votes they most often receive.

There is an aggregated version of the feedback mechanism entitled ‘University Challenge’ – users in this part of the app are able to see which university has received the most votes of a certain kind.

Paying users access a premium version of the app where they can see who has responded to their profile in advance, and they will also have the option to appear more prominently in other users games.