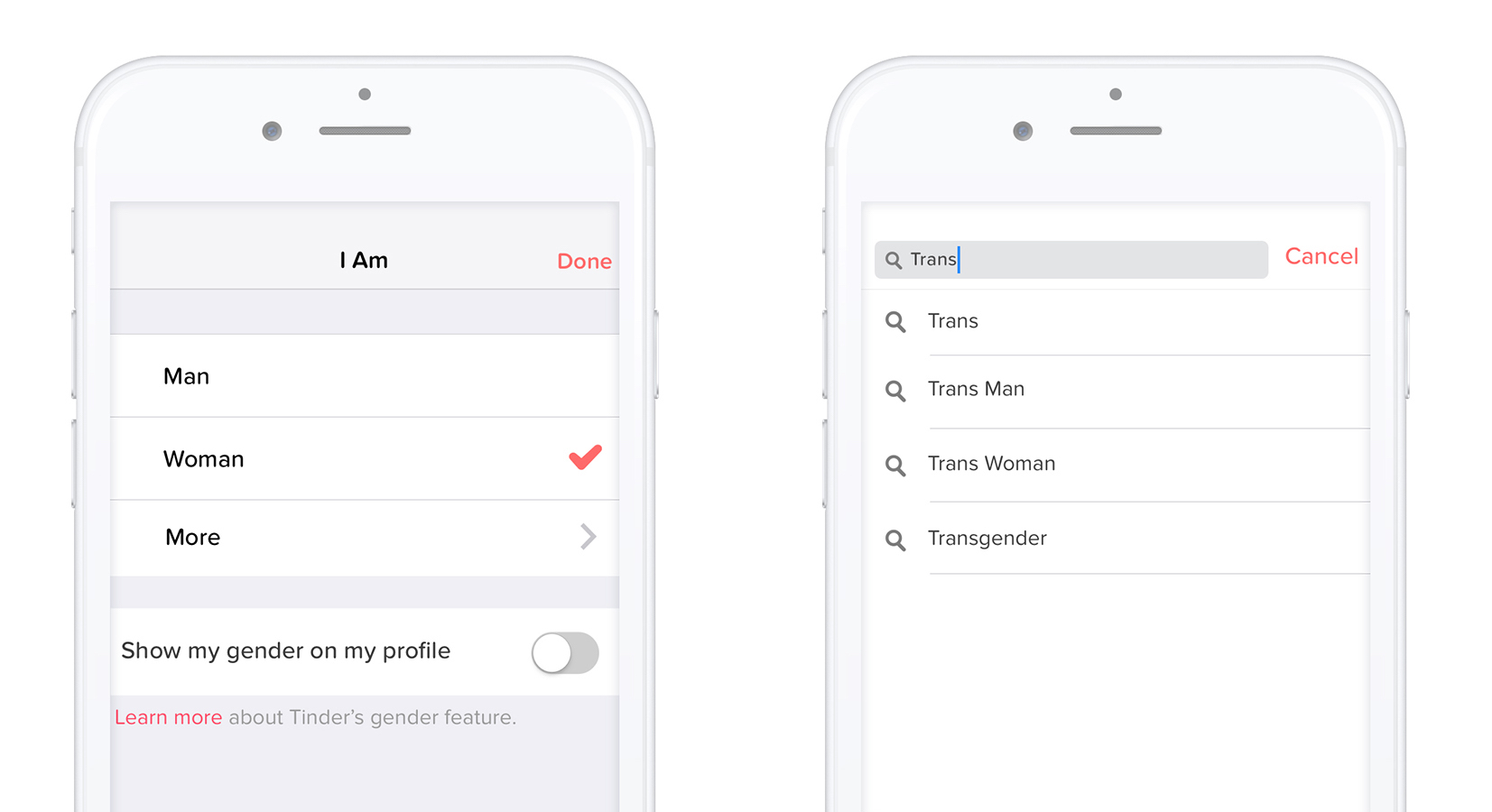 Tinder has revealed it is adding new gender options to its mobile dating platform.

As of today, Tinder is going beyond its previous choice of just Man or Woman, with a new More section.

In this area, users can manually input anything they want, but Tinder has also teamed up with LGBTQ media advocacy group GLAAD to create a list of 40 potential suggestions.

In addition to this, members can choose whether to “show my gender on my profile”, as well as deciding which set of results – male or female – they would like to appear in.

Talking to TIME, CEO & co-founder Sean Rad said: “Once we found out we knew we had to make a change. Because we’re really committed to making sure Tinder is a place for everyone. We will do everything we can to make sure Tinder is a safe place.” According to Rad, the idea came out of one of Tinder’s hackathons, and was then honed using focus groups with transgender users in their LA office.

It was during these sessions that Tinder heard first-hand about transgender people being reported by other users and their profiles getting suspended.

In a statement on its official blog announcing the new options, Tinder said: “No one will ever be banned from Tinder because of their gender. We haven’t had the right tools to serve our diverse community in the past, but that changes today.

“In addition to this new feature, we are learning to be a better ally to transgender and gender non-conforming communities by allocating additional resources to our support team, which includes educating our staff about the challenges facing these communities.”

And with its latest update, Tinder users can now edit or add more information about their gender on Tinder in the profile editing section.

In addition to this, the Hollywood dating app is also telling anyone who has been “wrongfully removed” from the app to get in touch.

The Match Group-owned app said: “If you believe you were ever wrongfully removed from Tinder because another user reported you unfairly due to your gender, we want to invite you back to our platform.

“Simply send an email to questions@gotinder.com with a link to your Facebook profile. Our team will review your request and work to grant you access to Tinder.”

Tinder has also committed to allocating additional resources to its support team and better educating staff on issues of gender.

Nick Adams, GLAAD’s Director of Programs, Transgender Media, said: “It’s important for a major company like Tinder, which has tens of millions of users around the world, to send this message that transgender people are welcome on the platform.

“Transgender people are part of the fabric of our American culture. They are part of your dating pool. And that is just the modern world in which we live.”

Tinder aren’t the only heavyweight dating companies to have expanded their range of gender and sexuality options – in 2014, OkCupid added a host of gender options, including woman, man, agender, androgynous, pangender, transfeminine, transgender, genderfluid and genderqueer.