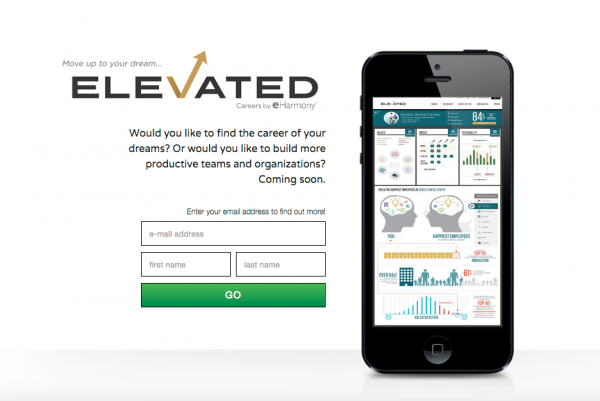 eHarmony is planning to launch its long-delayed recruitment service “Elevated Careers by eHarmony” in 2016.

The dating site has spoken about its plans to launch the job seeking service since 2012, and had initially planned to release it last December.

Earlier this year, the company delayed the release even further, saying the service will start to become available to select jobseekers by late March.

The founder and CEO of eHarmony, Neil Clark Warren is hoping to tap into the employment industry with the new service, which uses an eHarmony-style matchmaking algorithm.

The service will consider over 100 variables to generate matches, including skills, personality and social and cultural values.

The founder told Reuters: “Nobody has really matched personalities in terms of the applicant and the supervisor. That’s not something that LinkedIn or Monster do.

The service is set to be made available next year, but users can now sign up to ElevatedCareers.com, either as a jobseeker or recruiter.

A spokeswoman for the dating site said: “It’s so important that Elevated Careers is developed to eHarmony standards via client feedback.”

It is likely that both employers and jobseekers will be required to pay for the service, however some of its features could remain free.

eHarmony predicts a “high and double-digit” revenue growth this year, of somewhere between $275m and $350m, and its EBITDA is projected to surge by 50-70% for both this year and 2016.

The company even said it expects the new recruitment service to contribute about 60% of the company’s revenue within three years.

eHarmony currently has no plans to go public, according to its 80-year-old CEO.

“We love the position of being able to manage our own situation and not feel pushed by any public groups. We’re very much on the side of remaining private as of this time,” he told Reuters.

Daniel Kurnos, an analyst at Benchmark Co estimates that eHarmony currently has a market value of about $1 billion.