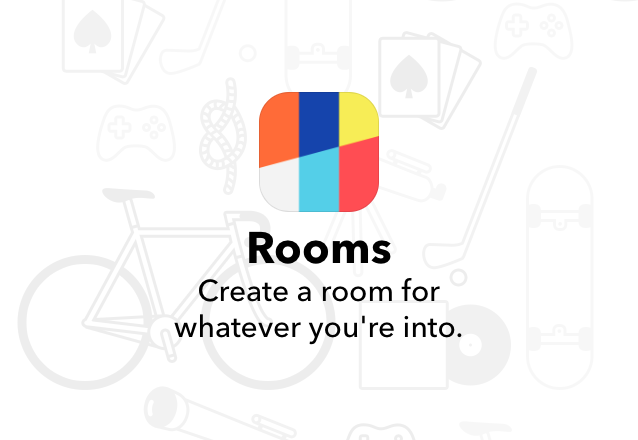 Rooms is a new app from Facebook Creative Labs, that lets users create and post in interest-based chat rooms.

The idea is a homage to the early days of the internet, where forums and message boards would let people connect over common interests from all over the world.

Rooms is Facebook’s way of reimagining these places, where “what you said mattered more than who you were and whom you knew.”

In a blog post announcing the app, they said: “Today, as we spend more time on our phones, primarily to communicate with friends and family, the role of the internet as a “third place” has begun to fade.”

Users of the app can create their own rooms, based on certain topics or interests, which are made up of feeds of photos, videos and text.

Other users can join the chatrooms by choosing a nickname, and can then share content and chat. One of the app’s creators, Josh Miller, said:

“Early users have already created rooms for everything from beat boxing videos to parkour to photos of home- cooked meals. There’s even a room called “Kicks From Above” that showcases photographs of cool shoes in cool places.”

You can also invite people to your room by texting, emailing, or even using a printed out code, which people can scan into their phones.

People who create the rooms can also customise the text and emojis, add a cover photo, create pinned messages, and customise member permissions.

The rise of niche in online dating shows that such communities are still very much a force, and Rooms is an interesting idea by Facebook to try and create an catch-all mobile platform for interest-based chatrooms.

Facebook are also looking to get in contact with “community builders” who believe their rooms could become a successful online community.