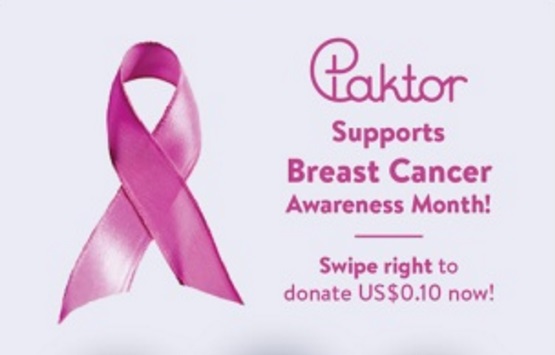 The app’s “Take A Swipe At Breast Cancer” campaign ran from the 15th to 21st October, and used Paktor’s swipe right mechanism to help donate to the cause.

The campaign was launched to coincide with October’s Breast Cancer Awareness Month, and hoped to raise USD $10,000 to support breast cancer charities across Southeast Asia.

After contacting Paktor about the results of the campaign, a spokeswomen for the app confirmed to GDI that Paktor had in fact exceeded its campaign goal of raising this amount within 5 days out of 7.

Throughout the campaign, the Breast Cancer Awareness card inserted into the profile deck received over 120,000 swipes, with the app donating $0.10 to the charity for each individual swipe. Engagement rates in Singapore were also higher than average during the week-long donation period.

65% of Singapore Paktor users who saw the Breast Cancer Awareness profile card swiped right to show their support to the cause, compared to the average of 35%.

The app has welcomed a new Director of International Expansion, Jose Ruano, and Vice President of Marketing Miguel Mangas to the team, to lead its aggressive growth into international markets.

Read more about the hires here.