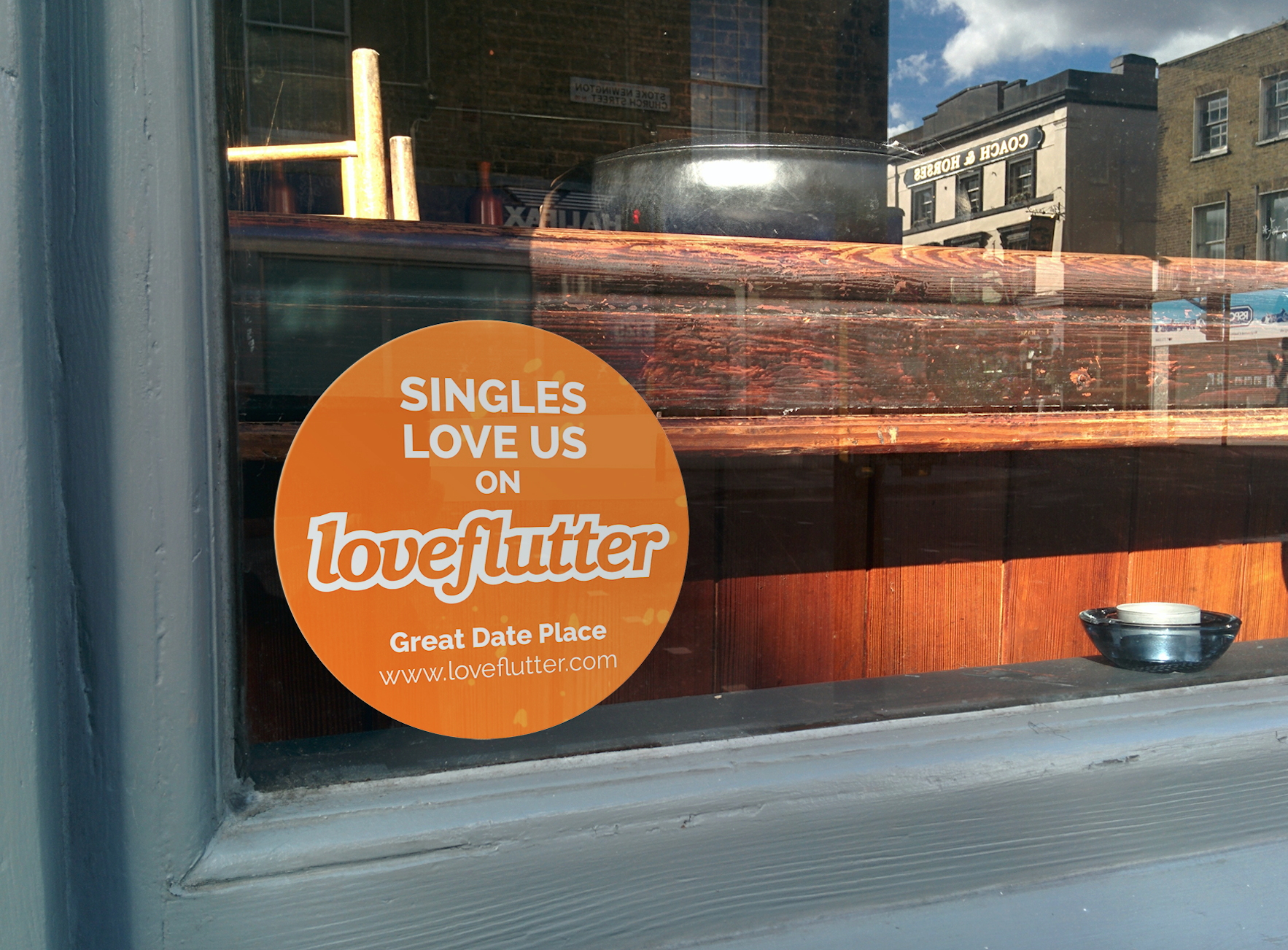 One of the biggest decisions for any mobile dating company is whether, how and when to monetise.

As we all know, Tinder recently introduced their paid service, Tinder Plus, which gives access to premium features, and swiping without ads or limits.

Last week, they also launched their first in-app advert – a video for a Bud Light party campaign, which users can click through and engage with.

And now British dating startup Loveflutter have just released their own solution to the monetisation quandary, with Promoted Places.

They are signing up advertising partners, who can promote their date locations to Loveflutter’s singles.

These advertisements will appear on Loveflutter’s existing Date Ideas tab, and through their in-chat Suggest-a-Date feature.

When singles are either browsing nearby date spots, or suggesting a date location to their matches, the establishments of paying partners will appear at the top of the list. The Promoted Places pay to appear in the venue search results, and pay on a “cost per action” performance basis for the ads.

Venues can also promote special deals and offers to singles, when they click through to their page, as you can see above.

We spoke to Loveflutter co-founder Daigo Smith, and asked what sort of feedback these date venues will get about the success of their ads.

Smith said partners will receive information including: “Ad impressions, number of times their business was suggested, summary demographics and approximate locations of the audience interacting with the ads (data privacy is a key concern of ours, of course).

“Partners are also encouraged to give a trackable offer (e.g. offer redemption code/password) to assist tracking users through the ad cycle to purchase point.”

Smith said that while Loveflutter don’t currently give partners notifications of whether Loveflutter singles visit their venues, “watch this space”, as they are “looking into check-in functionality and venue ratings (like Foursquare), booking functionality & bluetooth beacon technology as future updates.

“All to help connect with our users in-venue and offer advertisers direct conversion metrics.” The monetisation idea came after the Loveflutter team noticed users were browsing 20 date ideas and suggesting three of them to their matches every week, Smith said.

One very clever feature of Promoted Places is Loveflutter’s Dual Location-Based Advertising, which finds date locations based on the interests, and location, of two people.

So if two Loveflutter singles are chatting in-app, the algorithm calculates a date idea that fits the preferences of each user, and is a convenient location for both.

The British startup, which was launched in 2013 by Smith and co-founder David Standen, are trialling price plans for Promoted Places at the moment, which currently range from $50-$100 per month, to $100-$300 and $300-$500, depending on the partners’ budgets.

Smith said: “What’s key to note is that it’s a premium advertising solution, offering native advertising at a key point in the decision making process, leading to a higher conversion rate than existing forms of ads on mobile. Highly contextual and with high purchase intent.”

The model is being trialled with an initial group of 20 pilot partners in New York and London only – Loveflutter’s most active user bases – before the company rolls the feature out across other cities.

Jay Zimmerman, the manager of Se’kund Sun in Queens said: “A couple on a date are a valuable audience for us, we’re looking forward to trialling the platform and measuring ROI”. This isn’t Loveflutter’s only monetisation strategy, the London-based company also has their events division, Loveflutter Experiences, which holds events like their media-friendly Paper Bag Dating.

Like Tinder’s partnership with Gillette – something Snap Interactive CEO Cliff Lerner described as “very significant” at iDate this year – Loveflutter are also seeking to collaborate with brands who want to team up for monetised partnerships.

One impressive relationship Loveflutter have already made is with Facebook, who they recently met at their London HQ.

While co-founder Daigo Smith said he couldn’t say much because of an NDA, it seems Facebook were interested in the dating startup’s Dual Location-Based Advertising.

Smith said: “Serving up highly contextual ads relevant to two people’s locations and interests, all within a two-way conversation, would be a great model for Facebook to trial with its Nearby Places functionality.

“I’d envisage Facebook could do well by having a Meet-Up button (like our Suggest-a-Date) that displays ads for Nearby Places relevant to two people’s locations and interests, which fits really well with their goal of connecting people. It would both enhance the UX and give them a new revenue stream too.”

It’s certainly refreshing to see a new dating company coming up with genuine innovation with regards to both monetisation and location-based advertising, and it’ll be very interesting to see how Loveflutter’s monetisation plan plays out over the coming months.

Interested partners can sign up for the Promoted Places trial here – Loveflutter said they are capping the initial phase to 100 businesses in New York and London respectively.