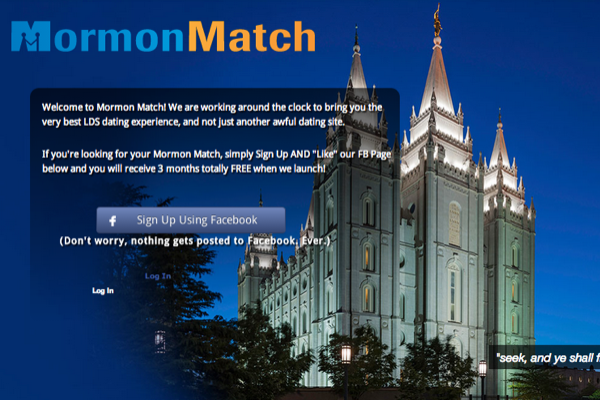 A Mormon dating site is fighting a legal battle against its own church, who claim “total ownership” over the word Mormon.

The Utah-based Church of Jesus Christ of Latter-day Saints, is trying to stop Houston man Jonathan Eller from using the word Mormon, and pictures of their Salt Lake City temple, on his singles dating site.

The 31-year-old wants to launch Mormon Match, with the dateamormon.com URL, but the church’s lawyers are trying to stop him.

Attorney Robert Schick from Intellectual Reserve Inc., who represent the Mormon church, told the Houston Chronicle: “We believe we are well within our rights to protect both the use of the name of the church and the image of the Salt Lake temple and to make clear that the plaintiff’s business has no connection whatsoever to the church.”

The controversy started when Eller submitted a trademark application for his site in June 2013.

The Mormon church then contacted him, asking for the site to be immediately shut down, saying they had “total ownership of the word” Mormon.

Intellectual Reserve filed an opposition to his application before the Trademark Trial and Appeal Board.

Eller is hoping a federal judge will assert that the Mormon Church can no longer take “further action to interfere with Mormon Match’s operation of the dating website, pending a decision on the merits of this action.”

Courthouse News Service also reported that Eller is looking for a declaration that the church “does not completely own the word ‘Mormon,’ or all images of Mormon temples for purposes of advertising, promoting, or branding.”

Eller said: “I love the church.

“I’m hoping we can come to a mutually beneficial arrangement. I don’t want to do any harm to the church.”