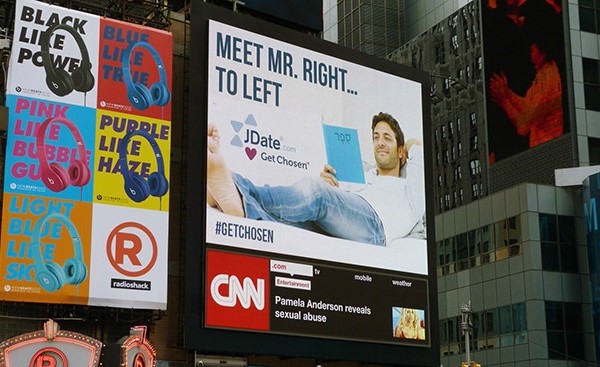 JDate have announced the winners of their social media-crowdsourced slogan contest.

Last month, the Spark Networks site launched a competition to find the next taglines for their Get Chosen ad campaign.

The winning entries are:

The authors of the chosen slogans will get their efforts published in a nationwide campaign, and each receive a free membership to JDate, worth $300.

The contest ran from the 23th April to 9th May, with entrants posting their ideas on Twitter and Instagram using the hashtag #GetChosen.

Greg Liberman, CEO of Spark Networks, said: “The ‘Get Chosen’ rebrand is all about highlighting the voice of the Jewish community, and this contest was a perfect vehicle to allow the community to speak directly, while further contributing to the authenticity of the campaign.

“We are thrilled with the submissions we received, which highlight the commonalities and traditions that resonate with the JDate community, and we hope the winners are just as excited as we are to see their slogans ‘in lights.’”

JDate underwent their first major rebrand since 1997 in February, launching the Get Chosen campaign with a series of cultural in-joke ads.

This used taglines such as: “More Jews than a Chinese restaurant on Christmas”, and “6,000 years of persecution just so you can go on Match.com?”.

The new slogans will form part of a nationwide campaign, appearing on billboards in Times Square in New York, and the Grove in Los Angeles.

They will also be part of digital ads on YouTube, Facebook, and Jewish-centric outlets such as haaretz.com.

Spark Networks, the owner of JDate, is currently undergoing a leadership crisis, with activist investor Osmium attempting to oust the current board of directors, including CEO Greg Liberman.

There will be a showdown at the company’s annual shareholder meeting on the 18th June, where the outcome of a leadership vote will be announced.