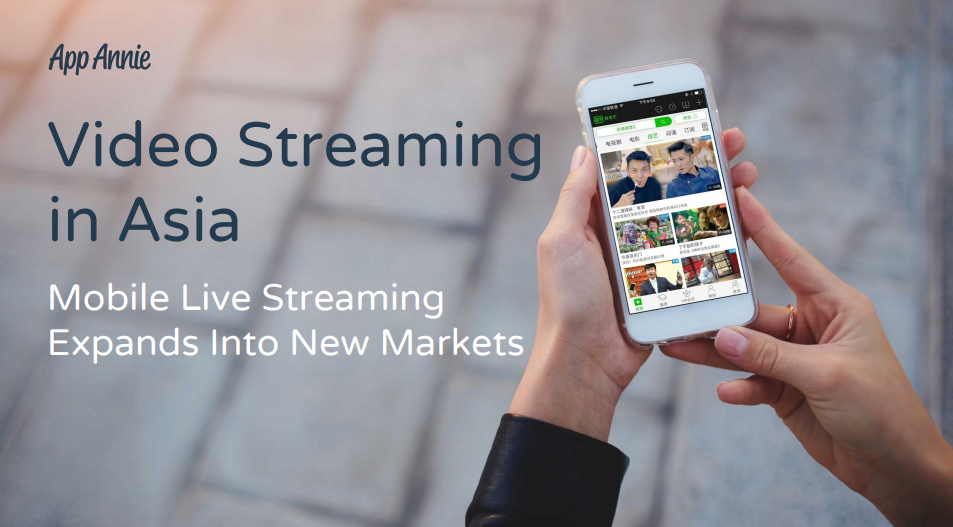 A new report by App Annie looks at the rapidly-expanding live video streaming space in Asia.

The report has revealed that in China alone, the live streaming market is predicted to be worth a whopping $5bn by the end of 2017.

This prediction comes after a big increase in revenue generated by mobile video streaming apps in China last year, with iOS revenue quadrupling during the 12 month period ending 31st October, 2016. The possibilities of live streaming as a revenue-generator were exemplified by dating & social app Momo last year, which saw its revenues rise by 319% compared to the year before, generating $108.6m by Q3.

As App Annie says: “Video streaming apps in Asia have seen stellar growth in revenue. While still trailing the US in terms of relative size, China’s revenue is especially high, where total revenue from the top 10 video streaming apps was over 10x greater than in Japan.

“Overall, all of the countries observed experienced significant growth in video streaming revenue. In fact, the combined revenue from Southeast Asia grew nine-fold, demonstrating the massive opportunities in video streaming.”

Cash is generally made via micro transactions, which often come in the form of virtual gifts.

These transactions also work to “enhance social interactions among streamers and viewers”, raising the profile quality of viewers and increasing opportunities for direct interaction with those streaming.

This is what happens on Momo, where users buy and send virtual gifts to live streamers, the company taking a 50% cut of the profits.

App Annie predicts the success of video streaming monetisation models across the region will be driven by lowering upfront costs and fostering ongoing engagement between content producers and viewers.

Live streaming engagement is also rapidly increasing, with time spent on live streaming apps growing in all markets studied between November 2015 and October 2016. In addition to this, time spent in Google Play’s Video Players & Editors category in the Asia Pacific region grew by 210% over the past two years.

App Annie’s data also suggests that this is not simply because new users are entering the market, but also because existing users are spending more time in video streaming apps.

The company explained the growth: “Live streaming video apps have seen a growing presence across Asia. In Thailand, four out of the top 10 video streaming apps by combined Android phone and iPhone MAU between November 2015 and October 2016 are focused on live streaming.

“In fact, in China, live streaming has been adapted as a valid format for entertainment and is offered as one of the offerings within long-form content platforms, usually involving sponsored streamers or celebrities. These apps are often published by leading Internet and communication giants such as Baidu and Tencent.”

And although Asia’s live streaming market is more advanced than most, this is part of a larger global tech trend, with some of the biggest US tech companies like Instagram and Facebook making big moves into the space last year.

Aside from Momo’s incredible success, such moves have also been seen in the online dating world – in December it was revealed that leading Southeast Asia dating provider Paktor had made its first acquisition, securing a controlling stake in live streaming platform 17, which has 15m users –  part of founder Joseph Phua’s vision to push the company further into the “social entertainment” space.

In addition to this, following its acqui-hire of Bae, if(we) announced its own move into the live streaming arena with a new social app called WeChill, which lets viewers send and share custom virtual gifts that can be cashed out by broadcasters.