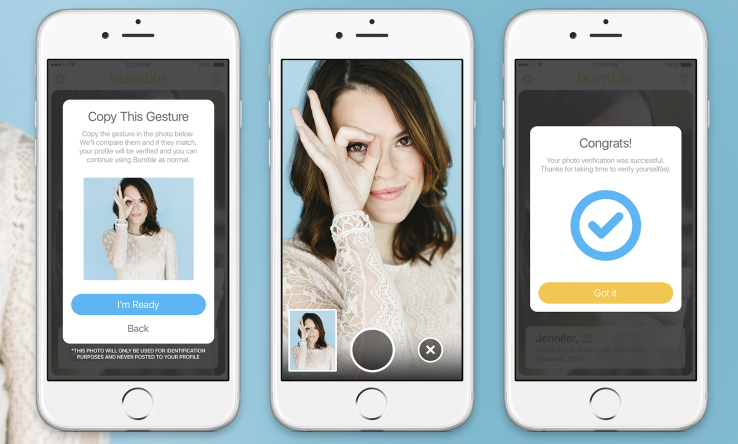 The feature works by showing users a picture of someone posing in a certain position, such as winking or holding up three fingers – one of 100 different “poses” the app has stored.

The user is then asked to take a selfie of themselves replicating this pose with the in-app camera option, and send it to Bumble.

These photos are then received by Bumble’s in-house verification team, who will make sure that the selfie matches up with the person shown in the dating profile.

The founder of the female-focused app, Whitney Wolfe, told Mashable the idea for the “catfish-killing technology” came up after some of its “high profile” users were reported as being fake, so the team wanted a way of verifying their real users.

The safety feature has a lot of similarities to the selfie verification system brought in by Badoo earlier this year, the dating giant that owns 79% of Bumble, which also lets users verify their profiles with selfies that copy particular poses. In March, Bumble founder & CEO Whitney Wolfe said the partnership between the two companies was “strategic”, and that the support of Badoo’s infrastructure had been “invaluable”.

And considering the similarities between the two features, it’s likely that this support extends to this particular verification system, with regards to the tech and the in-house verification team needed to execute it.

The verification tool will not be mandatory on Bumble, however if a user’s profile has been reported as being fake, they will have seven days to verify their profile before it is deleted.

For everyone else using Bumble, the feature will be optional – letting users prove they are real by getting a verified tick similar to those available on Twitter, Instagram and Tinder.

Speaking about the feature, Bumble said: “We expect to have a fully verified user base by the end of the year.

“So if those pretty profile pictures don’t match up to your pretty real time selfie, you will get the boot! We’re a real app, for real users.”

The feature will be rolled out in the next two weeks.