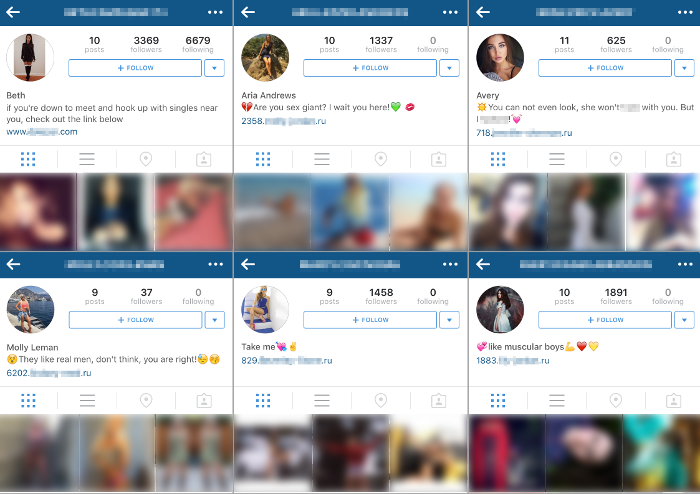 There has been a recent surge in scammers using Instagram to try and lure unsuspecting users to adult dating sites, it has been revealed.

Recent research by Symantec Security Response found that over the past few months, there has been an influx of fake profiles on the photo-sharing platform.

The profiles, which generally come in three forms, use stolen photographs to tempt users to the profile so the scammers can get a commission from affiliate links to adult dating websites.

And this new scamming strategy was recently laid out by Satnam Narang from Symantec in a blog post, who said the surge began in November 2015, with users noticing they were being followed and having their pictures liked by dodgy unknown profiles.

The images used in the fake profiles are generally taken from the real profiles of popular Instagram users according to Symantec, such as popular Youtuber and blogger Julia Pushman.

The first type of fake profile are ones that have a stolen avatar photo, no Instagram pictures, and a link leading to an adult dating site, as you can see below.

The second type also have a stolen avatar pic and Instagram photos, as well as containing some “suggestive” bio text, and a link to an adult dating site.

This text includes messages like “Are you a sex giant? I wait you here!” and “If you’re down to meet and hook up with singles near you, check out the link below”.

The last variation are designed to send the user to another Instagram account, by having a collage-style photo profile, with each individual image telling users to visit the “official profile” of the dating site. And Symantec’s research found that the links always lead to an adult dating website – either the site itself with an affiliate ID, or an intermediary page, as seen below: Speaking about the scamming tactic, Narang said: “Affiliate programs are the driving force behind adult dating and webcam spam on various dating and social networking applications.

“Unlike previous examples that we have identified, the fake profiles on Instagram are not bots; they won’t converse with users through the Instagram Direct feature.”

In 2014, Symantec also revealed the three main types of fake Tinder profiles scammers were using on the dating platform, as well as detailing how the scammers circumvented security updates that Tinder introduced to block the fraudsters.