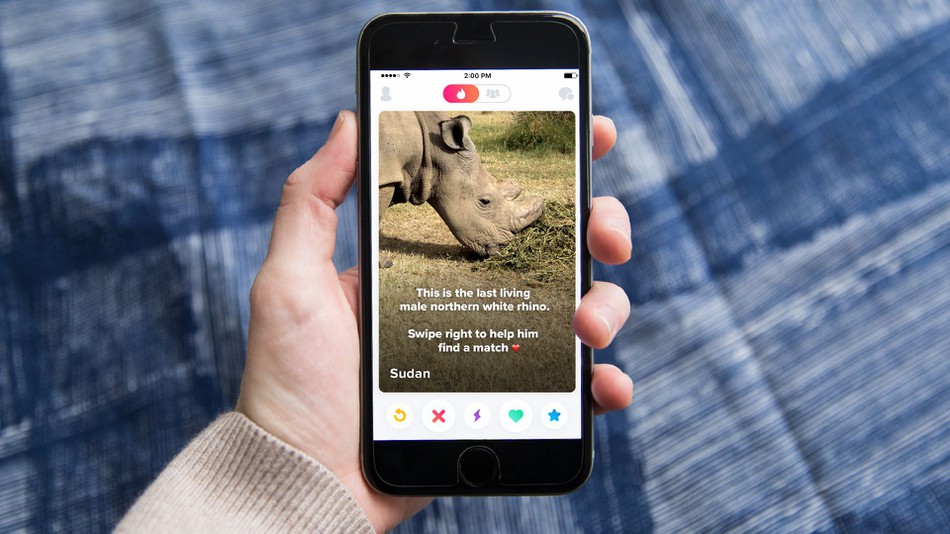 Dating app Tinder has partnered with the Ol Pejeta Conservancy in Kenya to help save the northern white rhino.

As of today, the profile of the last male northern white rhino in existence, Sudan, will appear on the Tinder app and provide a link to a donations page whenever someone swipes right on the profile.

The profile reads: “I’m one of a kind. No seriously, I’m the last male white rhino on planet earth. I don’t mean to be too forward, but the fate of my species literally depends on me. I perform well under pressure. I like to eat grass and chill in the mud. No problems. 6 ft tall and 5,000lbs if it matters.”

If a user swipes right on Sudan, they will be sent a message that includes a link to a donations page.

Head of Communications and Marketing at Tinder, Matt David, said: “We partnered with Ol Pejeta conservancy to give the most eligible bachelor in the world a chance to meet his match.

“We are optimistic given Sudan’s profile will be seen on Tinder in 190 countries and over 40 languages.”

The Ol Pejeta Conservancy is hoping to raise $9m, which it will use to help fund research into assisted reproductive techniques, such as in-vitro fertilization (IVF), to try and build up northern white rhino numbers.

At the moment, Sudan is staying with two female northern white rhinos called Najin and Fatu, however due to factors such as age, Sudan cannot reproduce with the females.

Although researchers are looking into using IVF techniques with Sudan and Najin and Fatu, they are also hoping that similar methods could be used to help Sudan mate with southern white rhinos, as there are 17,000 of this particular species in existence.

Mathieu Plassard, Regional Managing Director at Ogilvy Africa, said: “We are in a race. A race against the extinction of the northern white rhino species.

“We urgently need to raise awareness and funds for Sudan. No one could run this campaign better with us than Tinder.

“It will offer “the most eligible bachelor” global exposure in such a meaningful way. We are honoured and very proud to be part of this campaign that will have a positive impact on our environment.”

The campaign has been pushed on social media using the hashtag #mosteligiblebachelor, and a number of Twitter users have taken to the platform to raise awareness.

See some of the tweets below:

Humans were responsible for the steep decline in the numbers of the northern whites; this is our chance at redemption. #mosteligiblebachelor pic.twitter.com/yPL14K3NC2