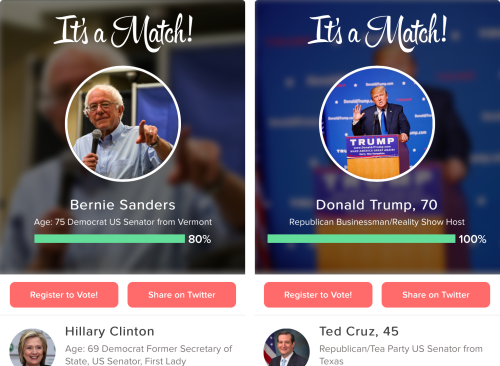 In an effort to engage its millions of US users with politics, Tinder has just created an in-app game to help singles find their perfect political match.

The Hollywood-based app has teamed with Rock the Vote to add a “Swipe the Vote” card to the dating app, that appears in amongst the normal profile feed. If Tinder users click the video card, they are entered into a quick in-app game about the big issues and debates in the US presidential race.

When an issue such as “Drill for oil and gas in the US?” pops up, users can click an info button to get more details on the issue, then swipe right or left, depending on their personal opinion on the matter. After swiping through 10 of these important issues, Tinder will then match singles to the candidate that best matches their views.

In addition to this, Swipe the Vote will also show how they compare with other candidates, and Tinder users can click on the presidential hopefuls to learn more about where they agree and disagree with them.

Tinder then lets people share who they matched with on social media, and register to vote via Rock the Vote.

Tinder said they built the feature, with the help of real-time polling platform Wedgies, after being “amazed by the amount of users expressing their political views with matches during this presidential campaign.”

The idea has actually been tried before – in 2014, digital news site Vocativ created a web-based app called Votr that helped people choose the right Senate candidate for them.

Speaking about the feature, Tinder CEO & co-founder Sean Rad told Buzzfeed: “It’s about connecting you with people, even including a presidential candidate. There’s so much noise out there it’s hard to find which candidate matches your own views.

“We should all at least be aware of the candidates and their views, and hopefully that will help people get out there and vote.”

Rad also hinted that the app was planning “different ways” of using Tinder to create new relationships in the future.