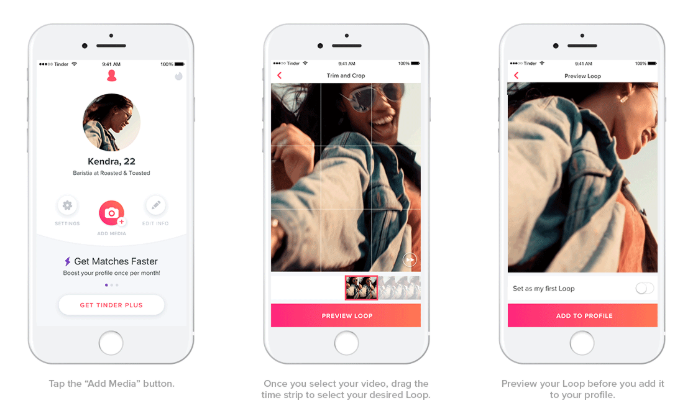 Tinder has made profiles more personal by adding Loops to the iOS app.

Users can now add two-second videos to their profile that loop and replay, just like a GIF.

They can upload pre-existing videos and edit them down to the right length inside the Tinder app.

The feature was originally tested in Canada, Sweden and Japan back in April, but has now been released in 23 markets worldwide.

Tinder’s CPO, Brian Norgard, said to iPhone in Canada: “Loops brought profiles in Canada, Sweden and Japan to life over the past few months and we are delighted to make the feature available to more Tinder users around the world.

“We created Loops so that users can highlight their personalities in a more dynamic, fun way — and we’ve already seen an increase in the number of matches during the test, as well as longer conversations.”

Original testing in Japan found that Loops increased conversation lengths by approximately 20%. Furthermore, there was a 10% increase in right-swipes in all three test countries.

They are also catering to members who can’t choose between still and moving images. There are now nine slots available for photos and Loops, rather than six.

Tinder Loops follows a growing line of dating apps that are embracing the use of video in their apps, such as Hinge and Bumble.

At the moment Loops can only be added on iOS, but there are plans to make it available on Android very soon.