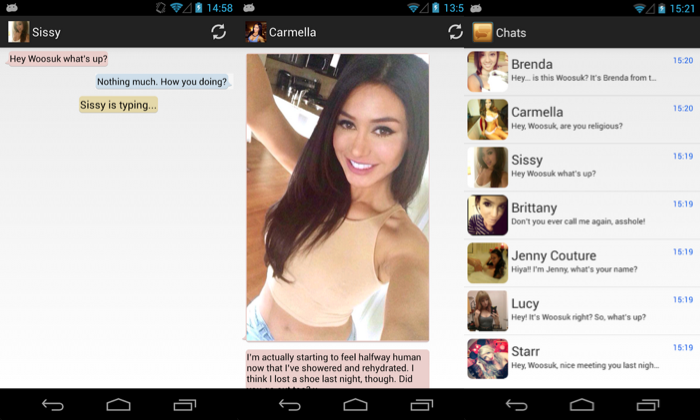 Some operators of dating sites, particularly those catering to a niche or adult-orientated audience, say there is often a portion of users who are very active on their sites, without actually meeting with other members.

These customers are perhaps drawn to the social side of a community-feel, interest-based dating site, where they can talk to likeminded people.

Women who use MyGirlFund, the subject of a Buzzfeed article earlier in the year, stated that despite the transactional nature of their role as “internet girlfriends”, many of the men use the site as their main social network.

EnglishRose23 said: “I know many that have recently had a loss in their family or just want to get away from reality of their day-to-day life, stress of their job, boredom, etc., and simply want to enjoy some female interaction, which is completely normal.”

Someone taking this idea a step further is Angus Cheng, who created an app called Phoney Girlfriend, which as its name suggests, is a roleplaying game with virtual girlfriends.

When you download the app, you are given two “free” virtual girlfriends, Brenda and Aloria.

You chat to them by choosing a choice of three different messages, and in return receive written, audio and picture messages from your fictitious flames. Use of the game has a time limit – messages appear saying “Brenda will reply in 1 hour” –  but once you “use up” one virtual girlfriend’s available conversation, you can pay to download another.

Cheng set about this idea back in 2008, when he thought about creating a Facebook full of virtual friends.

He started working in 2013, and launched a basic version, with help from programmer Hubert, in October.

Within one month they had 3,469 initial downloads, but lots of uninstalls – only 579 kept the app on their phone.

However Cheng found that 71 of the 579 users purchased the second character – a conversation ratio of 12.26%.

The in-app purchases range from £1.99 to £13.37, and over the past few months increased use has seen Phoney Girlfriend has become profitable.

Cheng also told TechInAsia said that after he killed off original virtual girlfriend Brenda in a freak zoo accident, users remarked how sad they were, and he brought her back from the dead, creating a Twitter account for her.