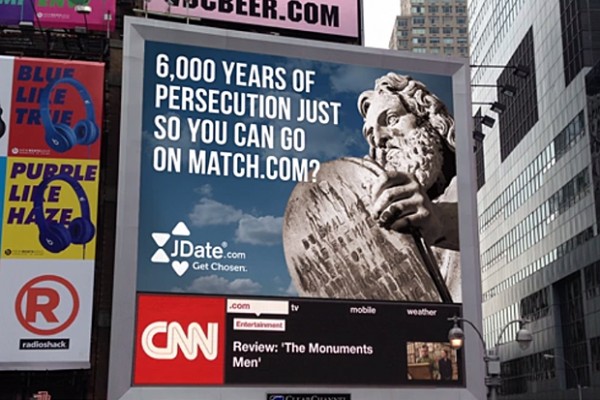 JDate has launched a new marketing campaign, inviting people to sign up and “Get Chosen”.

The slogan – a nod to the Jewish belief they are the “Chosen people” – will be added to their logo, and constitutes JDate’s first major rebrand since its launch in 1997.

The rebranding also coincides with a new homepage design and ad campaign.

Greg Liberman, Chairman and CEO of Spark Networks, the company that owns JDate, said: “In light of JDate’s mission — to strengthen the Jewish community and ensure that Jewish traditions continue for generations to come — and place within the Jewish community, we realized we had a unique opportunity to remind Jewish singles of the cultural ties, not just the religious ones, that make dating, and ultimately marrying, someone else who is Jewish so special.”

The campaign was created by New York-based ad agency The Terri & Sandy Solution, and will be rolled out across print, digital and social media.

It will also include billboard ads in Times Square and a street sign campaign in Chicago.

The ads feature Jewish cultural references, including messages such as: “More Jews than a Chinese restaurant on Christmas”, “Find someone who still loves to talk about sleepaway camp” and “Find someone who shares your love for gefilte fish”.

Another shows a picture of Moses holding the Ten Commandments, with the tagline: “6,000 years of persecution just so you can go on Match.com?”

Speaking to The New York Times, Sandy Greenberg, co-founder of the ad agency, said: “We don’t care if non-Jews don’t get this work.”

The campaign will expand to include TV and web video later in the year, with commercials and print ads planned for the three weeks before Passover.