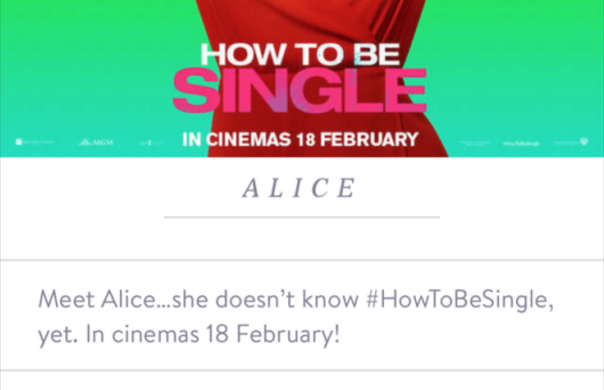 The app is currently using its first attempt at brand advertising to raise the profile of new film, ‘How to Be Single’, starring Dakota Johnson and Rebel Wilson.

During the campaign, Paktor users will be greeted with a branded profile card featuring an image of Johnson, alongside a short bio saying: “Meet Alice…she doesn’t know #HowToBeSingle, yet. In cinemas 18 February!”

To engage with the ad, users simply have to swipe right like they would on a normal profile, or dismiss it with a left swipe.

Speaking about the campaign, Paktor CEO and co-founder Joseph Phua said: “The concurrent and sometimes conflicting joys of singlehood, dating and searching for a committed partner is an experience many of us, including myself, have had.

“We are happy that we are partnering with Warner Bros. to run our first advertising campaign on Paktor to promote a film with a storyline that most singles can identify with.” To celebrate the new ads, Paktor is giving away 50 pairs of tickets to the film’s premiere to matched couples.

The new campaign marks the beginning of Paktor’s new venture into Brand Advertising within the app, where companies can use the app’s service to broadcast “creative and highly targeted campaigns” to its six million users.

Now, businesses can purchase in-app branded profile cards, which can be distributed to targeted user demographics and drive brand engagement.

According to the app, Paktor users typically spend 30 minutes on the app each day, and are exposed to more than 200 impressions per session.

Phua added: “We see this as a powerful and non-intrusive solution for marketers to tap into. Swiping has become second nature to the way digital natives interact and relate with mobile content.

“We expect advertisers’ brand engagement with Paktor’s target audience to be more effective over other forms of advertising.”