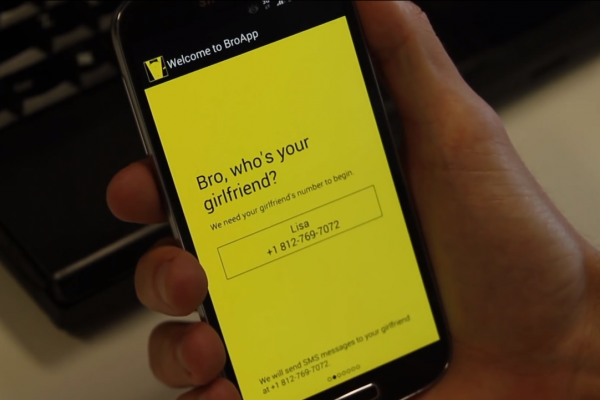 BroApp is a new app that wants to be “your clever relationship wingman”.

The male-only app automatically sends pre-selected text messages to the user’s girlfriend so that he can “spend more time with the Bros”.

Creators Tom and James from Brisbane, Australia, said: “We know that people are busy and sometimes forget to send enough love to their partners.

“We invented BroApp so that even if you forget to manually write a message, your love is still communicated.

BroApp firstly asks the user to choose his girlfriend’s phone number and then to compose a number of text messages which are sent according to a pre-programmed schedule.

The app has a series of features “to safeguard the BroApp secret” and prevent girlfriends from discovering its existence.

Firstly, the app allows users to register their girlfriend’s wifi so that it does not send messages when the couple is together.

Also, there is a “Girlfriend Intrusion Detector” which prevents “inquisitive girlfriends” from opening the BroApp by redirecting them to a list of gifts that are supposedly for them.

Lastly, the app is programmed to detect recent communication between the couple and postpone messages if they have spoken.

BroApp creators told Today: “We created a demo BroApp (we didn’t even have a name for it at the time!), just for our use, that sent a single daily check-in message.

“And was very well-received by our girlfriends!”

The creators claim that they were using the app for three months without their girlfriends realising.

BroApp was released by Factorial Products and is currently available only for Android devices, but according to the app’s website, an iPhone version is coming soon.

Watch their promotional video below: