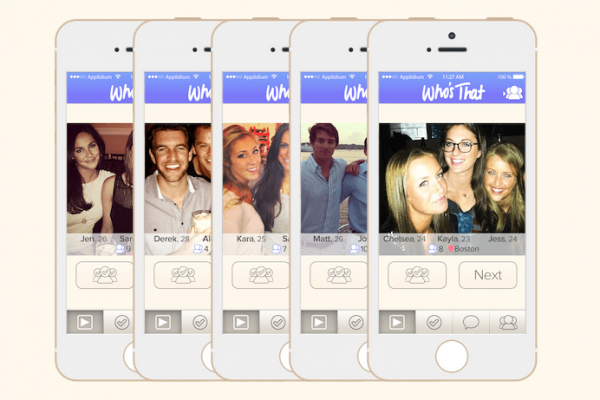 Who’s That is a new social app from Boston that sets up two groups of friends on a night out.

Users grab two willing friends to make a group, then match with other groups of three they might be interested in.

They then pick a place, a few nights they are free to go out, and invite the other group.

The other group can confirm a night, suggest a different venue if they want, and accept the invitation by preordering the first round of drinks, usually around $10.

“The best nights arise when a little serendipity strikes and you bump into a new group of friends who are cool, interesting, and understand your odd sense of humour. It’s the people that turn an average night into one you still talk about two years later.

“But too often serendipity’s elsewhere and that great group of friends you would hit it off with is too. Out at a different spot, maybe even just a few blocks down.”

Who’s That has competition in the form of Grouper, but they say their service improves on Grouper’s blind date model.

“Grouper has done well setting up completely blind group dates but going out, when you didn’t choose the people or the place, is less fun, a lot more stressful. We wanted to give control to the users, and make it natural and comfortable.”

Co-founder and CEO Sam Davidson was an analyst at Ohana, a startup that created a family sharing app that was acquired by Facebook, and CTO Brian Sachetta was an iOS developer at PayPal.

The app was originally in beta and exclusively open to students from major colleges in Boston, but they are expanding the group dating feature to young professionals in the area.

They have partnered with a number of date venues around Boston, and they split the profits of the first round of drinks.

Who’s That has around 4,700 users since its launch four months ago.