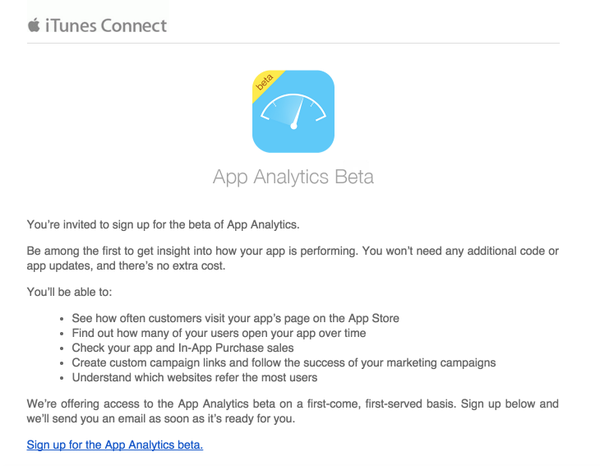 The feature was announced last year at the WWDC conference, but the company has now sent out invitations to a beta test.

The invitations were sent to select developers yesterday, and entry to the test version is on a first-come first-served basis.

The analytics tool, called App Analytics, won’t require any new code or app updates to use, and will be free.

Apple said the tool will tell developers how often customers visit their App Store page, how many users open their app, along with giving info about sales of their app and In-App Purchases.

In addition to this, the service lets you create custom links and follow the success of marketing campaigns, and telling you which sites refer most users to your app.

Last year Apple acquired Burstly, an app analytics company, who said they would be shutting down their main product – TestFlight – and working on Apple’s analytics tool.

It is unclear when the general launch of the product will be, but Apple has a WWDC conference in June, so we will likely hear more then.

Did any dating app developers receive an invite to the service?