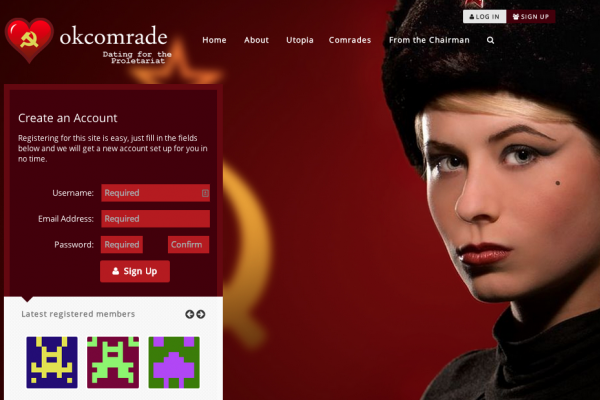 OkComrade is the leftist answer to OkCupid – an online dating site “for the proletariat”.

The site was inspired by a very popular Facebook page of the same name, and was built initially as “a bit of a goof”, the team said.

However OkComrade has grown into a proper dating site – offering leftists of any inclination a safe space to chat and meet comrades of similar ideology and beliefs, through anti-capitalist dating.

We spoke to one the site’s founders, known as The Chairman, who said:

“We think that people who share the same political ideology are much more likely to share other values.

“As we have observed on our site, not everyone has the exact same political views, but in general they share the same basic values.

“So what these people have in common are the things that matter for a successful, happy relationship.

“Would you really want to date a Republican?”

Membership is “free for the masses”, but the founders – who wish to remain anonymous – are monetising the site with a shop of Communist-related memorabilia.

The Chairman said: “Though we are tight on cash, we believe that working with corporate conglomerates like Google or Microsoft is a betrayal of our core values”.

Once you sign up to OkComrade, in addition to being able to meet and chat with other comrades, you have access to user groups on subjects such as “Communist Fashionistas” or “Polyamory”.

As a member, you can also post on the Utopia forum, which is split up into General, Romantic and Platonic conversations.

Regarding their userbase, The Chairman told GDI: “We have 3,055 members from all over the world, encompassing diverse cultural backgrounds, political ideologies, sexual orientations, genders, and hair colors”.

The site’s Chairman often writes blog posts to inform members about new features, and the progress of “bringing the Revolution to the Final Frontier: the Internet”.

OkComrade has a feature that lets people know how many members are online, giving an exact number of men and women who are logged in.

The site also has a column of “Top Members” displaying the profile pictures of the newest, most active and most popular members.

The founders did not expect the site to be so popular.

The Chairman said they had no idea that there were so many active socialists in the world, as on the surface the idea of creating such a site seemed like a very niche market.

The Chairman also said that he hopes OkComrade will start a trend for political online dating sites:

“Not only do sites like ours help people find partners with similar values, they also get people talking about politics, which is something that the world needs.

“Through websites like ours, we expand the discussion of politics from the narrow, polarized, partisan system that plagues America today”.

The team are working on bringing OkComrade to the masses, with an app in the pipeline, that will let you instant message and unite with local matches.