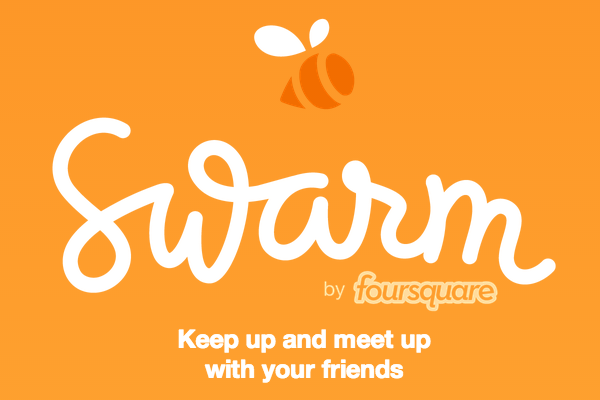 Foursquare have released a new app called Swarm, that lets you share your location to make it easier to meet up with friends.

The app was released yesterday, and is part of a split of Foursquare’s two main functions – discovering new places, and finding out where your friends are.

Swarm lets users enable Neighbourhood Sharing, with a simple swipe, which offers up your general location to friends who have the app.

“With Swarm, you can easily see which of your friends are out nearby, figure out who is up for grabbing a drink later, and share what you’re up to (faster and more easily than you can in Foursquare today).”

CEO Dennis Crowley said the point of their company was “never to build an awesome check-in button”.

Swarm is very similar to Facebook’s recently announced Nearby Friends, which also lets you know which friends are close by.

If both users have the feature turned on, Facebook notifies you when friends are in your vicinity, and lets you share you exact location, to make it easier to have spontaneous meetups.

When Facebook released this feature, Crowley took to Tumblr, reposting a quote from The Verge, which he said summed up the reason he wasn’t concerned about the competition:

“Facebook is still far and away the best site for sharing photos with friends, but pretending that the acquaintances we’ve accumulated during life are our friends is an outdated way of thinking about social networking.”

With Swarm taking charge of the friend finding function, Foursquare will focus on exploration and discovery, helping you search and find great local places.

Foursquare said: “We believe local search should be personalized to your tastes and informed by the people you trust. The opinions of actual experts should matter, not just strangers.

“An app should be able answer questions like ‘give me a great date dinner spot’ and not just ‘tell me the nearest gas station.’ We’re right now putting the final touches on this new, discovery-focused version of Foursquare.”

Regarding monetisation, the company says that because they have incredibly accurate location data, advertisers are more than willing to pay to use it as a platform.

As we’ve said before, with dating apps using similar close proximity location matching, it is surely only a matter of time before they follow Facebook and Foursquare into offering location-targeted date deals and suggestions, for people matched together on Tinder-style apps.