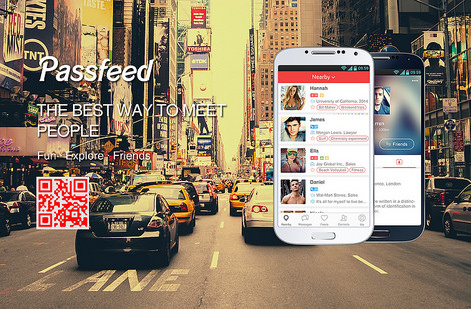 The California-based app, which allows people to search for people nearby who are interested in a friendship, has been given a “complete makeover” to make it even more accessible for its users.

Version 2.0 not only offers users upgrades to its interface, they can also access new features added to its Messages section, including voice mails, images and texts.

Users are now able to see friends, both old and new in the app’s messages feature, and can make changes to the personal information shown in its “Me” section.

Passfeed has also introduced a new “Feeds” section to its interface, allowing users to point to praise and comment on things they see on the feed.

The positioning of the camera icon has also been changed and is now placed in the upper right corner of the screen.

The app’s team has also used the new version to provide various bug fixes, which they hope will smoothen the overall user experience on the app.

Last week, the social network announced it hit 40m users worldwide in over one year, and is continuing to grow in popularity.

It is now the favoured social network amongst college students in the United States, given that it allows them to set up a date from someone in their college who is also using the application.

An Android version of the app was recently made available to download in order to meet the high demand for the platform.