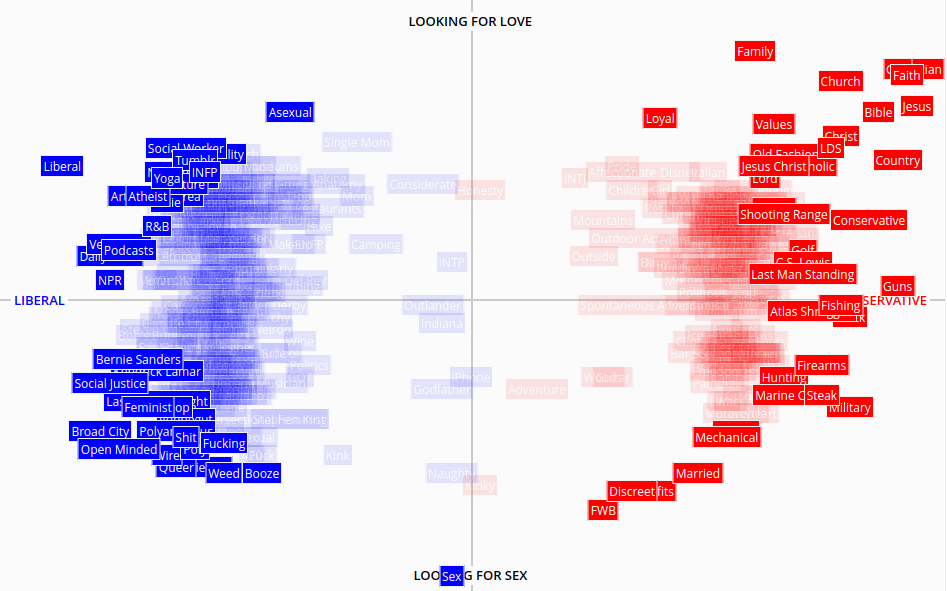 In a time of political uncertainty and division, dating site OkCupid decided to look at how important politics is to singles looking for love online.

According to the Match Group site, 50% of people would opt out of dating someone with opposing political views, a figure that has been steadily rising since 2008.

And in a recent study, called Words and Politics, the site revealed that people’s political views can also determine how singles advertise themselves online.

OkCupid explained: “Whether we’re aware of it or not, our political beliefs influence how we advertise ourselves romantically.

“To dig into this, we looked at words used on tens of thousands of OkCupid profiles to see which ones best distinguish liberals and conservatives, and then compared those words to OkCupid match questions.”

By doing this, OkCupid were able to create a picture of the opposing political spectrums, built up by users’ likes, favourite activities and interests. After looking at 190,000 OkCupid profiles activated in 2016 by American citizens, the site found some “high level” findings about words that are most distinguishing for liberals and conservatives, meaning “the words you see here most likely indicate someone’s political party.”

Interest in shows like The Daily Show, NPR and Broad City were all very likely to distinguish you as a liberal, whereas using words such as “Jesus”, “faith”, “guns” and “Marines” would tag you as a conservative.

And while conservatives interested in love were likely to enjoy “the outdoors” or “shooting ranges”, liberals looking for love prefered “museums”, “yoga” and “crying”.

Kendrick Lamar was also found to be the most distinguishing artist for liberals, with “except rap” appearing in profiles weighted towards the conservative end of the spectrum, and “hip hop” more common amongst liberal profiles.

OkCupid said the members they used for the survey had answered about 140 questions, and their written essays had around 1,000 characters.

The site also admitted that “to account for the fact that most OkCupid users identify as liberal, we determined the left-right position of each word by comparing the percentage of liberals that use that word to the percentage of conservatives that use it.”