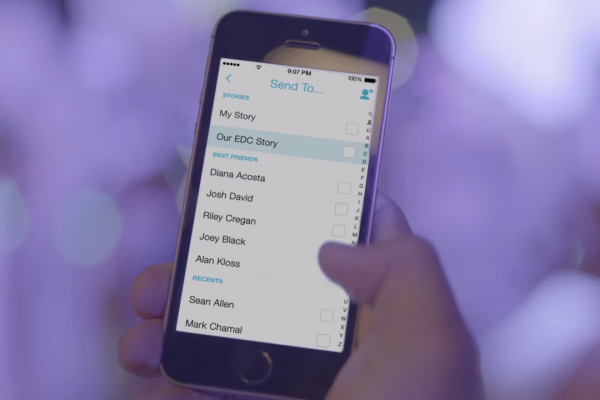 Snapchat have launched a new feature that lets users add their own photos and videos to a live event story.

Your phone will recognise that you are at an event via location services, and like a Twitter hashtag, you can take a photo and add it to a group stream.

The feature is an update to My Story, which was released last year, that lets users create a narrative of their day to share with friends.

“My Story has always represented a singular, personal experience. We wanted to build something that offered a community perspective — lots of different points of view. After all, our friends often see the same things in totally different ways.”

Snapchat have extended this idea with Our Story, to create a live timeline of an event that is uploaded by lots of people.

“We built Our Story so that Snapchatters who are at the same event location can contribute Snaps to the same Story. If you can’t make it to an event, watching Our Story makes you feel like you’re right there! It’s really easy to use.”

They said: “If you’re at Electric Daisy Carnival, simply add a Snap to “Our EDC Story” that appears in your “Send to…” page. You’ll need to turn on location services to let Snapchat know that you’re actually at the event. We don’t store your location.”

The feature also adds interesting location-targeted ad possibilities for event sponsors, future events, or nearby drink and food deals at a festival, for example.

What the Tiesto-featuring promo video: