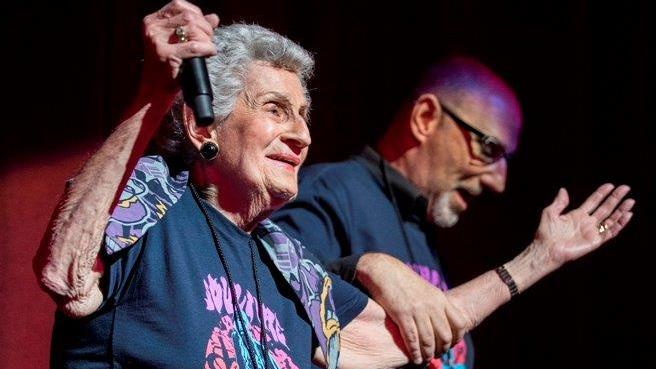 The New Jersey lady has never modelled or acted before but her face is now online, on billboards and on bus shelters up and down Manhattan and in Brooklyn.

The collaboration came about after Ms Slater introduced musician Steve Van Zandt at one of his concerts, and the video of her on stage to a huge crowd went viral.

As part of the campaign, she and three women were used to sell the idea that Jdate is ‘Powered by Yentas’, and that they were responsible for working out the site’s algorithms.

GDI spoke to Ms Slater to discuss the campaign further, find out if she is due to work with Jdate again, and get her take on how she thinks dating has changed with the rise of technology.

How did you feel when Jdate approached you to feature in their new campaign?

BS: “I was very excited and pleased that I was picked and was looking forward to trying something new!”

What feedback/reaction from people have you received since doing the campaign?

BS: “Many people were very happy for me and so pleased at age 90 I could do something like this. One person said you are a real celebrity and I should be proud. I have also heard from friends or family that I haven’t from in years who called me. The problem is so many of the people I would have liked to see this are not alive anymore, but that goes with the territory when you are 90!”

Are you due to work with Jdate on any other projects?

BS: “That is so funny you asked. They just reached out to me today about another project.”

How do you think Jewish dating differs from dating in the general dating population?

BS: “The only thing different is that if someone is going on Jdate they definitely want someone Jewish- I would think they are very interested in finding another “member of the tribe” and this is such a great way to make this happen. In fact my Grandson met his future wife through Jdate.”

How do you think dating has changed with the increase of new technology?

BS: “Well it used to be (when I was a teenager in the 1940’s) that if you didn’t get a call by Wednesday night for a date on saturday night it meant you wouldn’t have a date that weekend. But I guess today with a swipe or a click you can get a date anytime! I am not sure which is better because I met my husband sitting on a beach in New Jersey, no clicks involved. He asked me out immediately and we were happily married 61 years.”