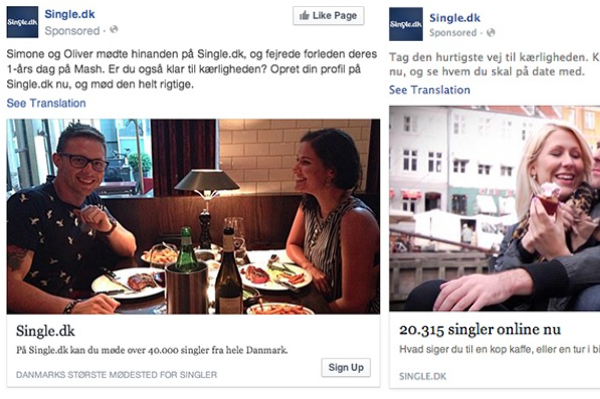 Danish dating site Single.dk have given details of their successful Facebook campaign, that made them the second biggest dating service in Denmark.

Single.dk’s campaign brought in 3.8x more customers than their TV ads, with a cost per acquisition that was 2.4x lower.

Their Facebook campaign, which included ads on News Feeds and video content, made up 24% of their entire media budget.

Single.dk’s Marketing Manager, Jonas Cronfeld, said: “The campaign proved that Facebook is the place where you can get the lowest cost per acquisition, so naturally we invest a significant part of our media budget in the channel.”

By changing the content and testing different ad formats, the team optimised the campaign to achieve the lowest possible cost per acquisition.

The site also said they had success using photos of local places, that users would recognise, in the ads.

“Our main goal was user acquisition. Signups and brand awareness. We needed a place where we would reach our specific audience–singles in Denmark. Facebook’s sophisticated targeting options allowed us to be successful in doing just that,” said Cronfeld.

“For a dating site, it’s very important to get a balance between men and women. On other channels, it’s difficult to reach purely female users, but on Facebook, it’s very easy and it helps us to ensure the necessary balance on our service.”

At the start of the year, dating sites started noticing that their ads were being rejected by Facebook.

The social network then said they were blocking all dating ads, everyone would have to reapply, and only those who became approved partners would be allowed on the network.

Facebook introduced these new rules because users were reacting negatively to dating ads, and their often explicit nature.

It was a move that angered many smaller dating companies, who saw it as favouring the largest sites, by giving them the run of dating ad space on the platform.

However Facebook are beginning to let dating advertisers back into the fold, and are expanding the number of approved advertisers, if they run non-explicit ads.

Single.dk’s success shows why those who might have been previously rejected would do well to keep trying for inclusion.