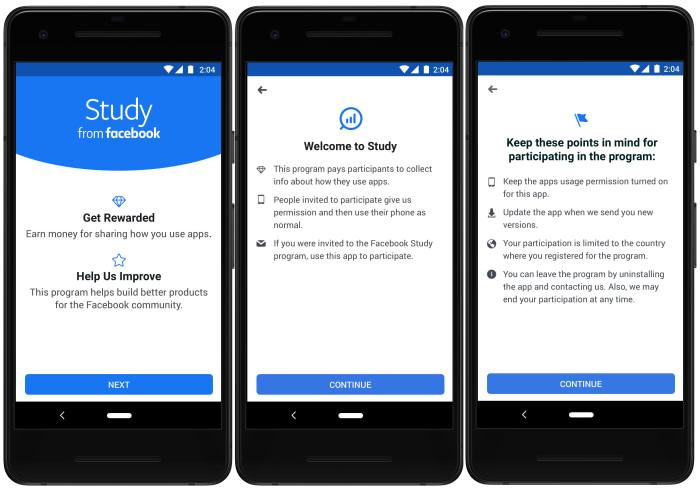 Facebook has announced the launch of a new product that pays people to let the social media giant track their activity on competitor’s apps.

‘Study’ is being described as a “market research progam” and transmits information about which apps are installed on a participants phone, how long they spend on them and which features are being used.

Facebook can also see the user’s country, device and network type, but Product Manager Sagee Ben-Zedeff ensures it won’t have access to passwords, user IDs or content, such as photos and messages.

The new app is initially only available in the US and India, but will be globally rolled-out over time.

It is also only live on the Google Play Store because Apple recently banned the collection of data about other apps for the purpose of marketing or analytics. This move came after it was discovered that Facebook was paying users as young as 13 $20 a month for extensive access to their private data.

The fee being paid is currently undisclosed but Facebook explicitly states that users must be over 18 to take part this time.

Ben-Zedeff preemptively addressed concerns in a statement by saying: “Approaching market research in a responsible way is really important. Transparency and handling people’s information responsibly have guided how we’ve built Study from Facebook.”

CEO of BigID Dimitri Sirota said to The Guardian: “This is a mixed bag for privacy. It’s a positive that this is opt-in and transparent. That is necessary, and much better than a secret data tracking campaign. However, the timing and tone is problematic and suspect, only coming after they got caught.”