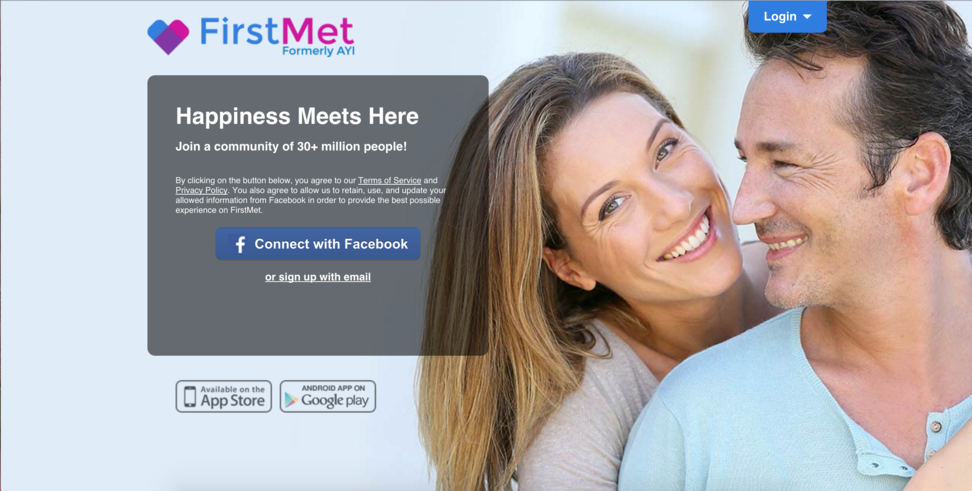 SNAP Interactive has just launched a rebrand of its flagship dating platform, AreYouInterested (AYI.com), in an effort to re-engage old members and entice new singles to the service.

Today, the dating company relaunched AYI.com under its new name, FirstMet, unveiling a brand new web design and enhanced features for both its desktop site and mobile app.

According to the company, FirstMet has an improved version of AYI’s popular IceBreakers feature, adding more ways for users to connect easily with each other.

The new product has also unlocked messaging to matches, allowing its users to send a first message for free to a user that they match with.

Speaking about the rebrand, SNAP Interactive CEO, Alex Harrington said: “AYI has always been a successful dating solution, offering a great way for a community of 30 million singles to meet and explore romantic relationships.

“However, we needed a stronger brand identity to communicate those benefits effectively to new and existing users.

“We are excited to unveil FirstMet, which captures the essence of our brand promise: to make it easy for single adults 35 and older to meet more people and lead happier, more fulfilling lives.” FirstMet’s iOS and Android app have both been entirely rebuilt, and now feature a streamlined back-end infrastructure that lets SNAP make frequent quick improvements at a lower cost.

Speaking about this, Harrington said: “SNAP has been investing for the last several months to elevate our mobile applications to the highest standards in the industry, since the majority of user activity in the dating category has shifted to mobile platforms.

“With the rebranded FirstMet iPhone and Android apps, we have made mobile the focal point for innovation at the company going forward.”

AYI was first launched back in 2007, and has since accumulated a worldwide user base of over 30m singles.

The relaunch of AYI not only brings a much needed refresh to the almost 10-year-old brand, but also marks the beginning of SNAP’s attempt to re-entice old, inactive members from its user database.

To help with its re-engagement efforts, FirstMet will be offering free trials, as well as “open house” dates, which lets both new and existing users to experience the benefits of premium features free of charge. Harrington added: “We believe that rebranding to FirstMet will reinvigorate usage in the product and reengage former members, driving revenue growth for the company.

“It is also an important strategic move to create a foundational brand for a product with a valuable 30 million user database.

“Finally, the rebranding affirmatively targets an underserved niche in the market, adults 35 years and older.

“With much of the industry attention and innovation focused on hook-up apps and the millennial generation, FirstMet fills an important void in helping single adults seeking new relationships, while minimising the effort and stress of getting back in the dating game.”

FirstMet is available to download now for iOS and Android devices, and can be accessed through its official site.