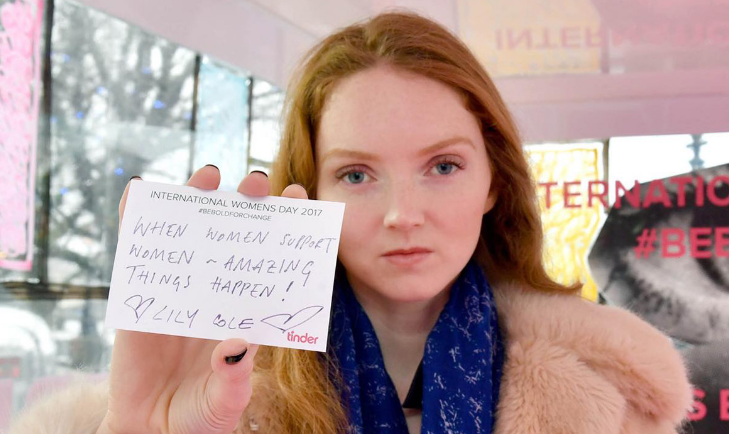 Yesterday was International Women’s Day and to commemorate it, Tinder launched a number of campaigns to help raise both money and awareness for the day’s cause.

In addition to its $250,000 charity giveaway, the dating app also launched a one day art exhibition on London’s Southbank, asking women to leave inspirational and encouraging messages to each other.

The event took the same title as the International Women’s Day campaign, #BeBoldForChange, and was created by British artists Charlotte Colbert and Philip Colbert.

The exhibition ran from 8am to 8pm GMT at Southbank’s Observation Point and was unveiled by English model Lily Cole.

Charlotte Colbert told Dazed: “Empowering women throughout the world is a key thing for development, progress of humanity and of the world in general.”

Philip Colbert added: “In the sometimes overwhelming era of communication in the digital form, it’s so nice to receive a letter or read a note from someone else.”

Check out our #BeBoldForChange collaboration with Charlotte and Philip Colbert at Observation Point on London’s South Bank. pic.twitter.com/yfoNiYrj2R

This exhibition was run alongside Tinder’s US-based social media campaign #FundHerCause, which saw the dating app give $250,000 to charity.

People were asked to tweet @Tinder, stating a cause or charity they were particularly passionate about.

Tinder then sent them a special code, which enabled the person to access a $100 donation and choose which women’s charity (out of a possible 12) to send the money to.