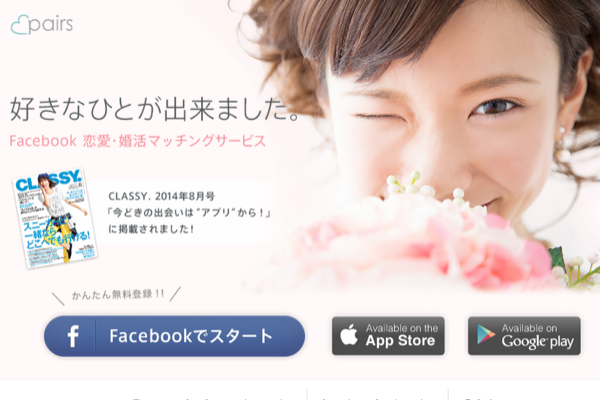 Japanese Facebook-connected dating service Pairs has reached 1m users, and is looking to expand across Asia.

Pairs was created by Tokyo-based Eureka, and launched in 2012.

Since the launch, they have accrued 740,000 Japanese users, and 300,000 from Taiwan – after expanding there in February.

Users can create an account if their Facebook status is set to single, and they are then put through an age verification process.

The site also has interested-based communities that users can join, and employs a 24/7 web security team.

According to TechInAsia, Pairs plan to conquer Taiwan, then move to South Korea.

In a statement, Pairs said:

“Pairs will devote itself to spreading the concept of online dating, a much easier way to find and meet a compatible partner.

“By accelerating expansion in Asia, a region which Western online dating services have not yet been able to penetrate, Pairs will establish a new online dating industry that will fit Asian culture.”

Pairs is free for women, and makes its money through paid subscriptions for men.

The site also has a mobile app for iOS and Android.